Shimla/Mandi. Prime Minister Narendra Modi (PM Narendra Modi) has a rally at Paddal ground in Mandi on the completion of four years (BJP Government 4th anniversary) of Himachal Pradesh government on 27th December. In this regard, the police has prepared a traffic plan. At the same time, the police has converted the entire city into a cantonment from the point of view of security. On Saturday, SP Mandi Shalini Agnihotri in Police Lines said that from the point of view of security, the Paddal ground and the city have been divided into 11 sectors, in which about 2000 policemen will be stationed.

With this, Shalini Agnihotri told that the entire Mandi city including the meeting place will be under the surveillance of CCTV, then other security related equipment including dog squad team will be present. Along with this, the police will keep an eye on every activity through 5 drone cameras within 5 km radius of Mandi city.

Traffic plan will be like this tomorrow in Mandi
SP Shalini Agnihotri said that on December 27, there will be a complete ban on any non-essential vehicle in Mandi city from 6 am to 8 pm. Along with this, he has also appealed to the truck union on December 27 not to allow movement of trucks in Mandi city. At the same time, he told that if any driver brings or parks a vehicle in the city during this period, then legal action will be taken against him. Along with this, tourists will get to cross the patch of Pandoh from Nagchala before 6 am and only after 8 pm. Mandi SP said that 4 entry points have been made for the public in the meeting place. At the same time, 23 other gates have been made inside the ground from where the public will be given entry.

Know how the system will be
Giving information about the temporary parking and traffic arrangements, the SP said that all the vehicles coming from Lahaul-Spiti, Kullu-Manali, Balichowki, Saraj and Pandoh side will land at Bhuli Chowk. After this there will be park in Bandravani by taking U-turn. In return, the buses will come to Bhuli Chowk and put the passengers in their respective vehicles. Apart from this, all the trains coming from Chamba, Kangra, Jogindernagar, Padhar and Kataula side will deboard the passengers near the new Victoria Bridge and will be parked on the right side of the bridge along the Beas river. In return, passengers will be seated in their respective vehicles from near the new Victoria Bridge. 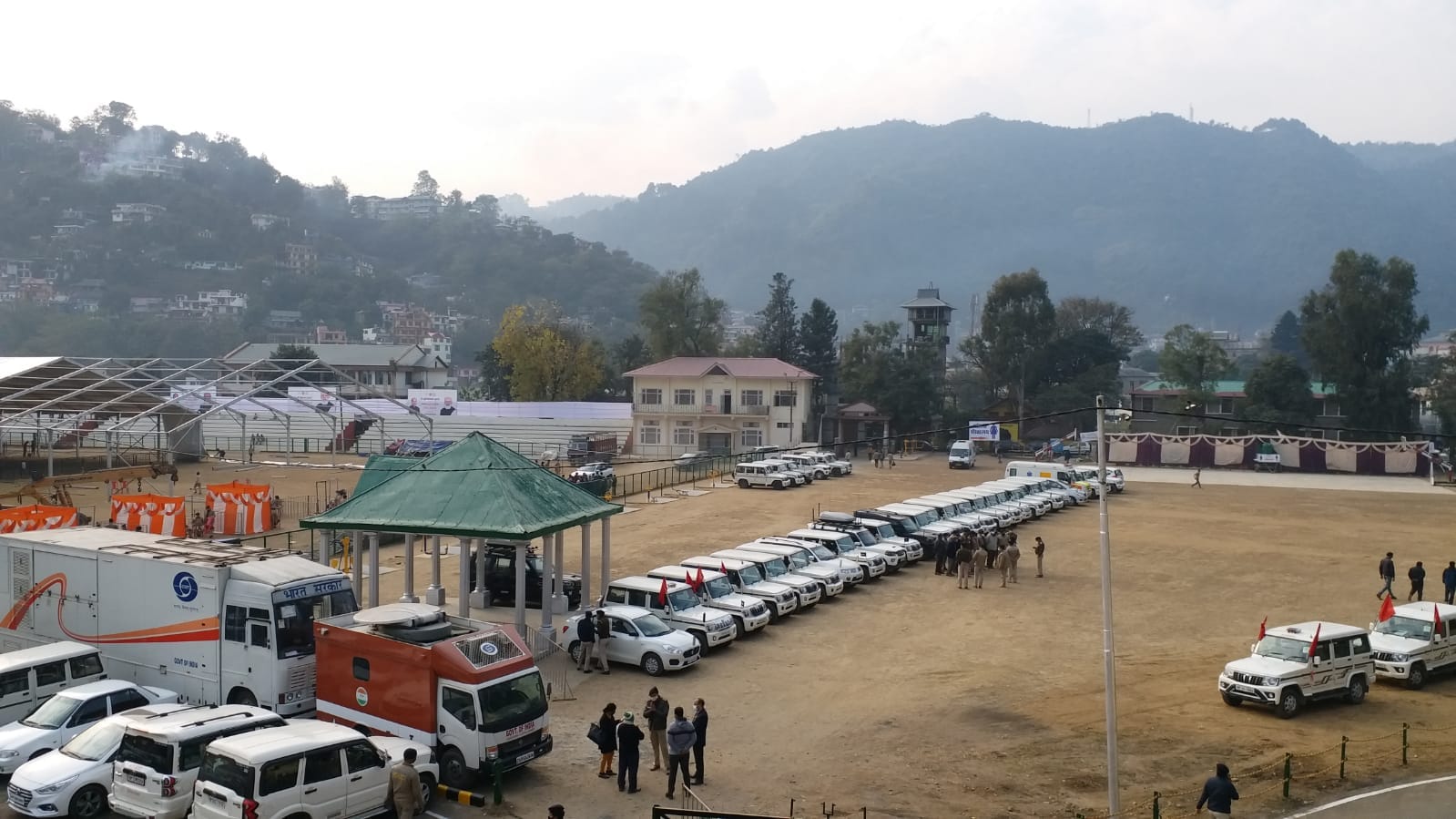 Apart from this, all the vehicles coming from Sundernagar, Nerchowk, Gagal, Rewalsar, Kotli and Talyahd side will land near the truck union (bypass). After taking a U-turn from here, it will be parked near the new bypass towards Sabzi Mandi and in return, passengers will be seated in their vehicles from Pul Gharat. Whereas all the trains coming from Kotli Via Sadyana, Bir-Lag and Bari-Gumanu side will deboard near Skodi Pul Chowk and will go back and park at Talyahar. On return, passengers will be seated in their respective vehicles from near Skodi Pul Chowk. VVIP vehicles will be parked near Jogindra Gymkhana, then all small vehicles will be in BDO office, Himachal Home Guard Ground Bhuli and Gurdwara Paddal. Except for patient vehicles and emergency vehicles, all tractors, Mazda, big trucks, big vehicles and goods vehicles will not be allowed to enter the city market from 6 am to 8 pm.

Temporary bus stop and one-way traffic system
Buses going towards Bari Gumanu, Bir Log and Kotli will run through the new Suketi bridge as before on the scheduled route. Their stay will be only for a few moments at Mahamrityunjaya temple and Skodi bridge for boarding and unloading of passengers. While the passengers of the buses coming from the district hospital should take off on the Skodi bridge. Apart from this, no bus will stop anywhere inside the city other than the above stoppages. Via Talyahar via Jail Road, Kahanwal Chowk will be towards Pulghat. No vehicle will be parked near taxi stand, bus stand and on the road, nor will there be three wheeler park outside the police line. Apart from this, there will be no three wheeler park on the road outside Vishwakarma temple. At the same time, buses and other vehicles coming to Mandi city via Sarkaghat, Rewalsar to Mandi and Via Jail Road will come towards Mandi via Talyhar bypass, Kahanwal Chowk, Pulghat.

Apart from this, one-way vehicle arrangement from Ramnagar Pratap Hotel to Kaihanwal Chowk (other than two wheelers) which will be from Pulghat towards Ramnagar Pratap Hotel. The entry of four wheelers will be prohibited from near Vishwakarma temple towards Ramnagar. There will be one-way traffic system from the old Suketi bridge to the old bus stand. There will be one-way vehicular movement from Mandi city for Victoria Bridge, which will be outside Victoria Bridge via Gandhi Chowk via Chowhatta. Loading and unloading of goods in goods carrier vehicles (trucks) will be prohibited in Mandi city from 6 am to 8 pm. There will be a relaxation of 24 hours for ambulances, emergency patient vehicles and police vehicles deployed for law and order in the above one-way routes.

This is the guideline for those coming to the meeting place

from your city (Market)

Do not bring any other electronic material and belongings with you to the meeting place other than your mobile phone.

It is forbidden to carry bidis, cigarettes, matches, lighters, bags and any kind of flag to the meeting place.

The arrangement for drinking water has been made by the administration at the meeting place, so do not bring water bottles etc. with you.

It is prohibited to take any kind of food and beverages to the meeting place.

Maintain peace at the meeting place and for any kind of help contact the Police Help Room.

It is prohibited to enter the meeting place after consuming any kind of intoxicant.

Do not park the vehicles on the side of the road, but park them only in the designated parking space.