New Delhi: The Congress party on Monday released its second list of 11 candidates for the upcoming Uttarakhand assembly election.

According to the announced seats, Harish Rawat will contest from Ramnagar. Anukriti Gusain Rawat, the daughter-in-law of former BJP leader Harak Singh Rawat, has been fielded from Lansdowne. 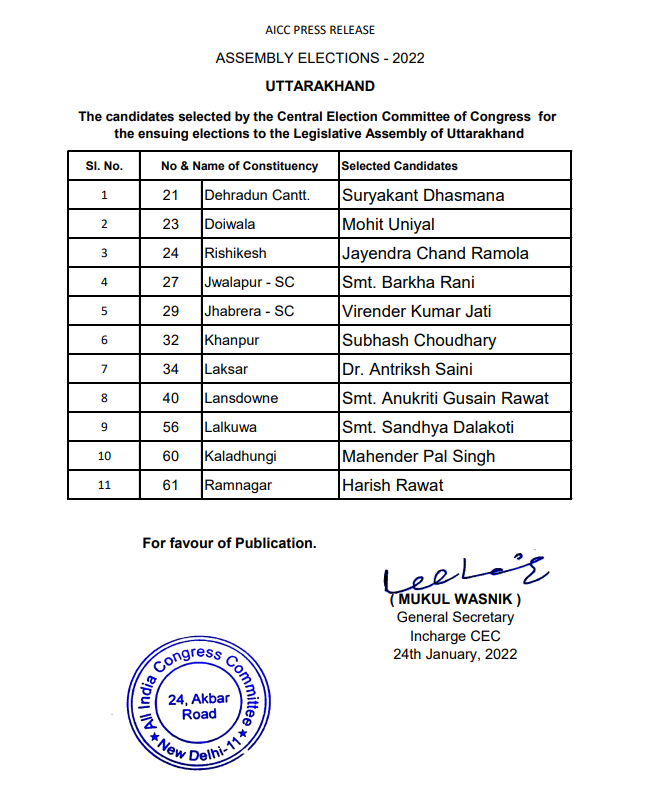 Earlier in the day, Uttarakhand Congress on Monday launched a poll campaign titled “Char Dham, Char Kam”, making four promises to people of the state if it comes to power in next month’s assembly election.

The promises included Rs 40,000 per annum to five lakh families in the state and not letting the LPG cylinder price cross Rs 500.

Launching the poll campaign in the presence of Congress campaign head Harish Rawat, Chhattisgarh CM Bhupesh Baghel said the four promises are being made as price rise and unemployment are at their peak while the poor are getting poorer and the rich becoming richer under the present government at the Centre.

Bhupesh Baghel alleged that the present government’s policies were aimed at bringing more prosperity to industrialists at the expense of the poor. He promised Congress will not allow the LPG cylinder price to cross Rs 500 if it comes to power in Uttarakhand.

To tackle the problem of unemployment, the state Congress has decided to pay Rs 40,000 per annum to five lakh families of the state so that they could lead a life of dignity, he said.

Apart from this, four lakh people will be given jobs and medical services will be taken to people’s doorsteps with the help of drones considering the uneven topography of the state, Bhupesh Baghel added.

Voting in Uttarakhand will take place in a single phase on February 14 and the counting of votes will be on March 10.