The Ashes, which is famously showcased as a rivalry born out of fierce competition, between Australia and England is actually a love story between an England captain and an Australian girl. The television promos of The Ashes love to show the use of burning fire, supposedly depicting the rage between the two nations. Well, there was fire, but it was totally non-violent reasons.

It might be hard to believe, but there is a love story behind the greatest rivalry in cricket. The story begins on 29 August 1882. Australia had defeated England on their home soil for the first time. Back then, Australia was infamously known for being the ‘jail colony of England’. It was a nation where England sent its prisoners and criminals.

Thus, this defeat was seen as a humiliation for the British. To make it worse, the Australians printed a mock obituary in The Sporting Times on the very next day of the Test match. saying that the English cricket had died at the Oval Cricket Ground and ‘The Body would be cremated and the Ashes taken to Australia’. Here, the Australians did not actually mean to take any ashes home, but rather, they meant it as a metaphor to signify England’s loss.

Here is the Mock Obituary: 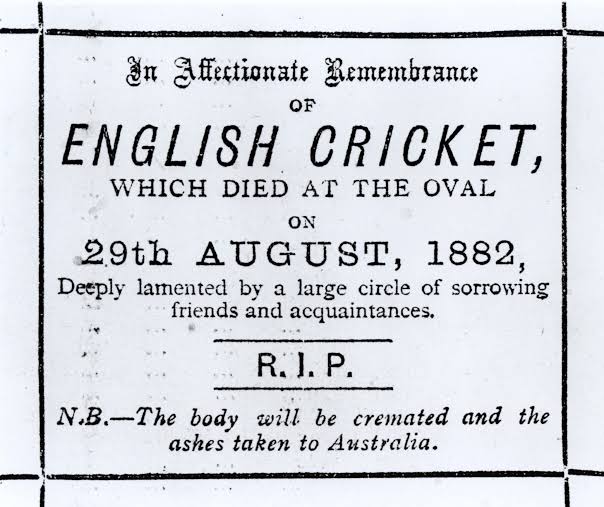 Well, as things panned out, England won that game and regained their pride. Ivo Bligh completed the promise that he made to the people of England. After the match, a woman named Florence Murphy collected the bails of the stumps and burnt them. As believed, she collected those ashes in a perfume bottle (the present Ashes Trophy resembles the shape of that perfume bottle) and presented it to the England captain, Ivo Bligh.

Bligh was extremely delighted after winning the match. After he went back to England, he showed off the perfume bottle and declared that he has brought the Ashes home.

But what happened to the woman who gave this perfume bottle?

After winning the Ashes, the England captain sailed back to Australia all alone the following year to propose Florence Murphy. He reached there and married Murphy. Bligh stayed with her for the rest of his life.

For 43 years, the perfume bottle was kept in Bligh’s house, but after his death, Murphy gave the bottle to the Marylebone Cricket Club (MCC) of Lord’s Cricket Stadium.

It was only in 1990 that the England Cricket Board and Cricket Australia decided to play a Test series every two years and formally call it ‘The Ashes’. It was mutually decided that the trophy would be a replica of the perfume bottle that was gifted to the then English captain.

Since then, not a lot of love has been lost between the two nations as The Ashes series continues to be one of the most fierce rivalries in cricket. Lot of iconic moments have been shared by the two nations in various Ashes Series’.

So, did you know this love story behind the greatest rivalry in cricket? If not, do let us know in comments about what you feel of the story.