Saif Ali Khan’s sister Saba keeps sharing pictures of her family from her archives. Recently she shared a picture of her brother which came as a treat to the fans.

Saba shared a throwback back to Saif’s school days. In the picture, her late father Mansur Ali Khan is seen lifting Saif on his shoulder. The two have been captured with wide smiles plastered on their faces. Saba posted the online picture sourced from a fan account on her stories and said that she has the original copy as well.

Sharing the picture, she wrote beneath it, “This is an online pic…but we have the original in an old album. Full version too. It’s my favorite. Abba with bhai on his shoulders!” 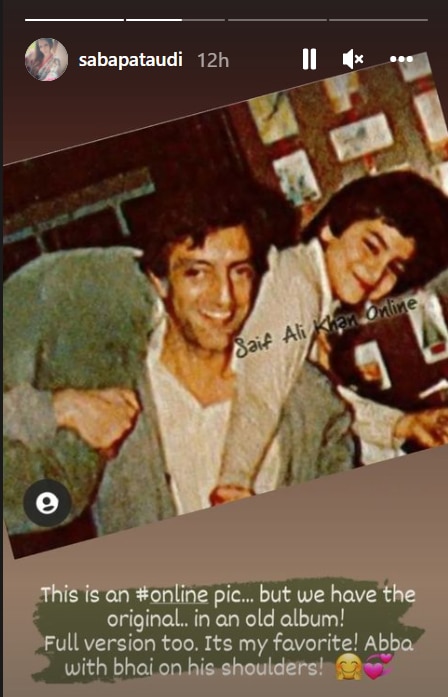 Saif fondly remembered his father in a recent appearance on The Kapil Sharma Show. He revealed how he took up acting unlike his father, who was one of the greatest cricketers, but they still had quite a few things in common. One of them being- their love for books.

Saif revealed, “One day my father was alone at home and everyone was out shooting, my mother, me, and everyone. As no one was there at home I called him up and asked him if he is okay, are you feeling lonely? So, he said I am not lonely; I have my books with me. So, I liked that sentiment a lot and you know, even I feel the same way. I like books a lot.”

Mansur Ali Khan Pataudi was famously known as Tiger Pataudi. He was a cricketer and led the Indian Cricket Team as its Captain. He died at the age of 70 years in Delhi’s Sir Ganga Ram Hospital. He married actress Sharmila Tagore and had three kids, Saif, Saba and Soha Ali Khan. Saif and Soha had joined the film industry following the footsteps of their mother while Saba stayed lowkey, away from the limelight.